After all that talk about magic in The Lost Age, and how deities fuel their power I thought it would be pertinent to show of the latest on one of the first “Mortal Deities”. Mortal deities were mortals who ascended to god hood, as opposed to natural deities who were willed into existence.

We’re going to explore the dark past of Jueera, the fickle goddess of the sea. Who through cunning gained godly power and helped free her people from slavery. With it we have another excellent illustration by Audre “Charamath“, and an excerpt from Jueera’s holy book “The Canticles of the Sea” written by Paul T.

A ferocious storm fell upon Jueera and her crew, rising up from nowhere, blackening the sky and blotting out the sun. The eyes of Sal were blind to her, the storm took the Nightfall, Jueera and her crew. For a time all was black. The sea swallowed her and she knew she was dead, knew her punishment was finally upon her.

But Rahros was not finished with her. Jueera washed ashore upon a tiny island, in sight of the Straight of Rahros. She toiled countless days there, scavenging and despairing of the arrogance that made her take the helm of another ship. On the thirteenth day of her isolation, a man appeared to her. A barrel chested Malverian with a great black square cut beard shot through with silver, dressed in a wrap of sailcloth and spun gold. Rahros, god of the sea was upon her. In ancient times, the gods of Malkos betrayed the Titans of old, and took their power for themselves. Beholding him there, before the straight that kept her people prisoner, she knew it to be true. He seemed almost a man, but beneath was the stench of the monstrous.

Rahros spoke simply, with benevolent smile, that no one, god or mortal, had bested him as she had, and he had grown fond of her in his frustration. He declared that he would marry her, and together they would rule the waves and tide forever. As he spoke, Jueera’s canny mind spun a last, desperate plan for the future of her people. The sunpriests sung songs of the arrogance of Rahros, and here it was before her, obvious as the wind in a sail. So she spoke to him in the manner he might expect from one at his mercy. “Oh mighty Rahros, king of the seas, how can I join thee as I am? Wretched and mortal upon this forlorn rock, mortal and defeated. Grant to me but a portion of thy strength that I might swim with thee in the depths and come to know thee.” Rahros considered, nodding, and lo Jueera was blessed with the gills and tail of a fish, that she might swim beneath the waves.

At length they swam together. Rahros showing Jueera the sweep and span of his vast kingdom beneath the waves, and the strange peoples who dwelt there, fearful of their dread king, and once more Rahros swelled with pride as he looked upon his new prize. Jueera spoke again, “Great one, thy hath granted this one the semblance, but not the true essence of this grand realm, thy true kingdom. Grant me a shape to please the peoples of the deep, and thee.”

Rahros grew suspicious, sensing a trick. In his speech was the hint of dark rage, roiling just below the surface like a undertow waiting to take a man overboard. She glimpsed the power of his monstrous nature, restrained. “Jueera, at my side, thy need not please the people of the deep. You could aid thine own accursed people, doing more here as my queen than ever you did in thy treacherous ship. Why dost thou reach beyond what I have given thee?”

Confronted with his dark nature, Jueera was struck with fear, but pressed on, heedless of the danger. “For love of thee. I would not dishonor thee with this feeble mortal frame, this imperfect slaves flesh.” At this great Rahros softened, laying his hand upon her and gifting her with great barbed tentacles and glistening, squamous flesh, like unto the beasts of the depths. Rahros looked upon her and saw true beauty, befitting a bride of the sea.

Rahros would not be put off much longer, wanting, at last, to claim fully his prize. Jueera spoke once more, knowing if she failed, he would strike her dead. “Oh Rahros, lord of the waves, rage of the storm, we have swum together, and I have pleased the deep people. But I despair, for I have seen the power of thy true self, lurking beneath this semblance of mortal flesh. How can I truly be thy queen if I cannot please the full measure of thee, man and beast?

Rahros grew angry, but could not sustain it. No mortal had gazed upon his true self and faced him. He took her hand once more and returned to the island of her isolation, carrying her into the Grottos that lay hidden beneath. He spoke once more, “Jueera, behold the fallen Titan, who’s power I claimed in ancient past. The wellspring flows still. Accept it’s power as my last wedding gift to thee, and become my queen truly, not as a slave, but an equal.”

There, within the lightless depths, was the carcass of the old one, it’s form twisted and grotesque, but it’s life blood flowing still. Rahros carried her into the pool it formed and submerged her. She felt a great pull, a connection with what remained of the Titan. As Rahros exalted, Jueera in secret drew into herself the full essence of the Leviathan, the spark of it’s life merging with her own.

And so, Jueera was married in a grand ceremony below the waves. All the gods and monsters of the Malverian Patheon bore witness while the beasts and peoples of the sea reveled. And there did Rahros finally claim his prize, taking Jueera to his bed. And there, in the throes of his ecstasy, did Jueera reveal herself to him, Leviathan. And in just satisfaction, she consumed her husband whole.

Thus was the noose removed from the neck of the Thakir people forever. The jaws of Rahros were thrown open, shattering. Never to be closed again.

Stay tuned for more on Jueera and her legacy!

Sign up for E-mail updates to get Kickstarter news and selected updates. 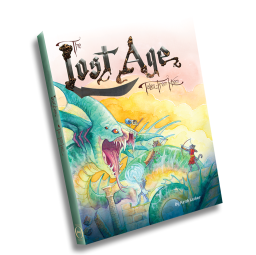